[Beschreibung]
This two day hike lead us on the Pasubio, a mountain group at the south edge of the Dolomites in Veneto, Italy.

Right from the start we hiked up the famous „Strada delle 52 Gallerie“, which stands for „road of the 52 tunnels“. The name says it all: The track leads through 52 tunnels via the first 6 km/1000 hm, some of them 10 meters long, some more than 300 meters long (you should carry a lamp). Some tunnels go up like a corkscrew, others have windows into the deep. Outside the tunnels the walls of the mountains often go straight up on one side of the track and straight down on the other side. All in all the „Strada delle 52 Gallerie“ is really spectacular. 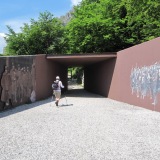 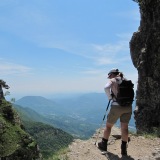 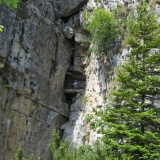 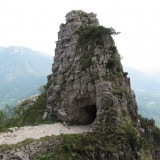 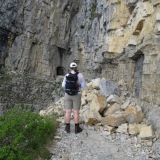 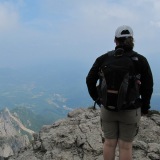 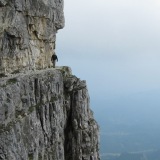 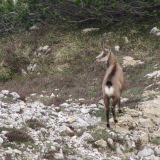 The „road“ ends at the „Porte del Pasubio“ at 1928 m where also the mountain hut „Rifugio Generale Achille Papa“ is located. This is where we wanted to stay for the night, so we asked for a room and made a coffee brake.


After that we made another short hike up to the top of the highest mountain in the area, the Cima Palon (2.232 m). In this area some awful fights took place between Austria and Italy during the first world war. The place is also called „mountain of the 10.000 dead“. And it looks like that: The whole place is covered with tunnels, trenches and craters from explosions. Kind of scary when you walk around through this scenery in the fog from the upcoming clouds.

The next day we took another way down to the car. A little longer, but easier to walk since it began to rain.